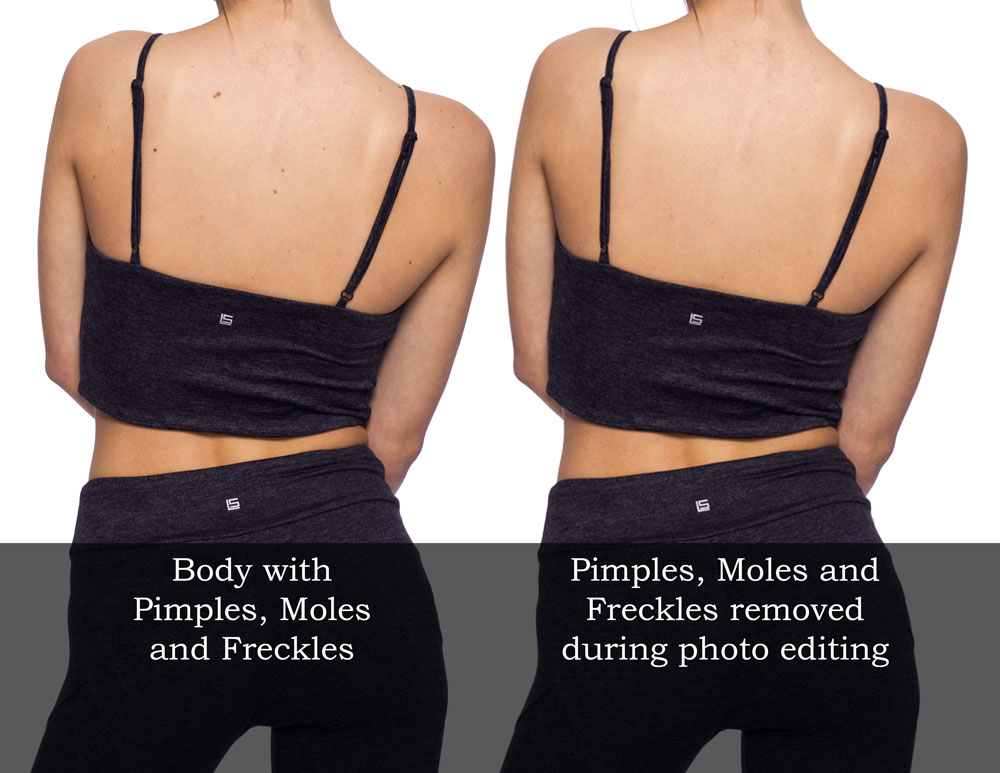 Located in Vancouver, BC, Canada, we offer services in photo editing, photo retouching and rendering, modification, and photo restoration for individuals, transportation companies, construction companies and other industry sectors.  Rendering can be provided to show before and after scenerios.  Photo editing is also known as “photoshopping” or “photoshop” a photo.

About Retouching and Editing

Photo Editing and Modification / Touch Up 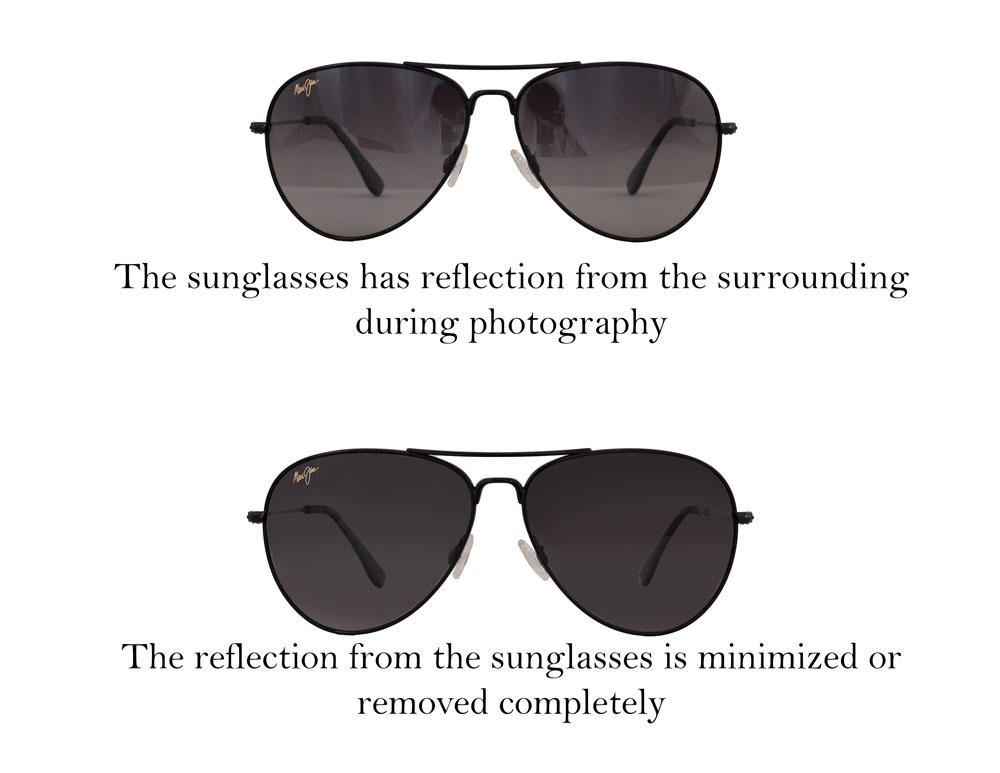 About:  We do photo editing in background removal and changes, unwanted element and objects removal, photo touchup, subject isolation, item and prop replacements, color and lighting adjustments. Red eyes, wrinkles, pimples, eye reflection removals, and glares from eye glasses can also be touched up, adjusted and removed. Old photos can be restored by removing cracks and restoring the color. A green screen can also be used to take portrait or head shot photos, and clients can customize their own background or background color. We also do contrast, color and exposure adjustment to existing photos.

Background re-creation:  Some portions of photo editing may involve re-creating elements in a photo such as a missing portion of a cabinet or wall after removing another unwanted element.

Other photo editing examples include removal of elements, pieces or logos from an existing photo or replacing a background or blending in another person into another photo.  We can also remove watermarks on a photo.

Other purposes served:  In addition, we can assist transportation industries in doing before and after photo renderings.  For example, how a road or landscape looks like before an infrastructure change and how the environment looks like after the change as simulated.

Photo Editing for Graphic Design:  We take existing photographs and edit them to make them integrate well in graphic design for flyers, newsletters, restaurant menus, and cards.

Subject Extraction:  Our photo modification and retouching is ideal for situations where one would want to extract a person from a group photo, and put the person against a pure solid color background as a formal single person portrait.  It is possible to remove a person from an existing photo background and transfer the person onto pure white background.

Specific Areas of Editing:   Specific areas of the photo can be edited according to situations.  For example, if a tripod or subject is reflected in a mirror, then the mirror can be edited to remove the unwanted tripod or subject.  Another example is that the glass window itself may have paper covering to be edited to make it look like the window reflecting the street instead (as below). 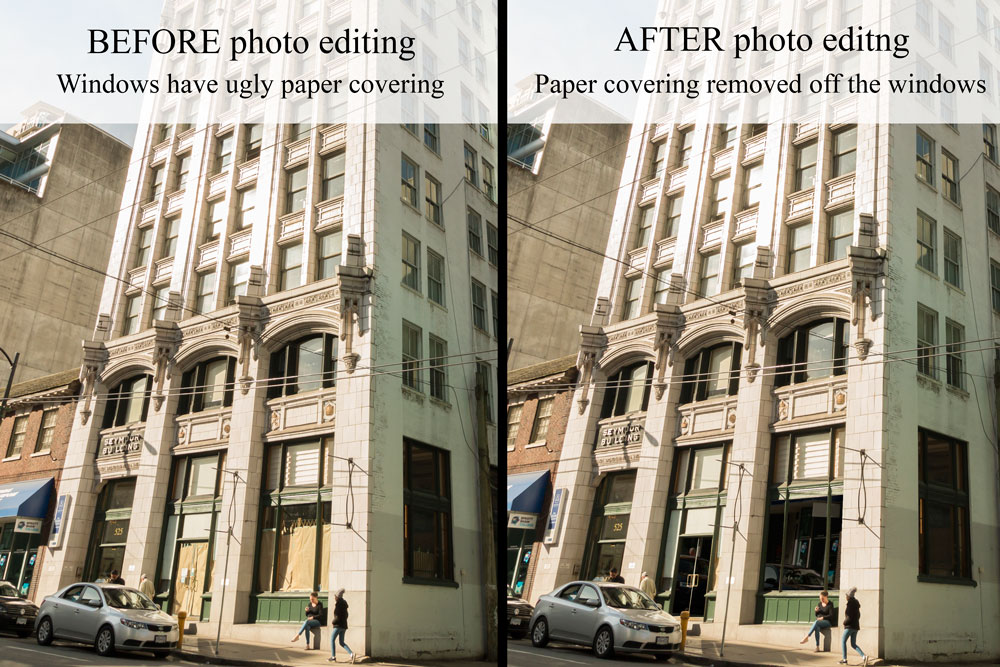 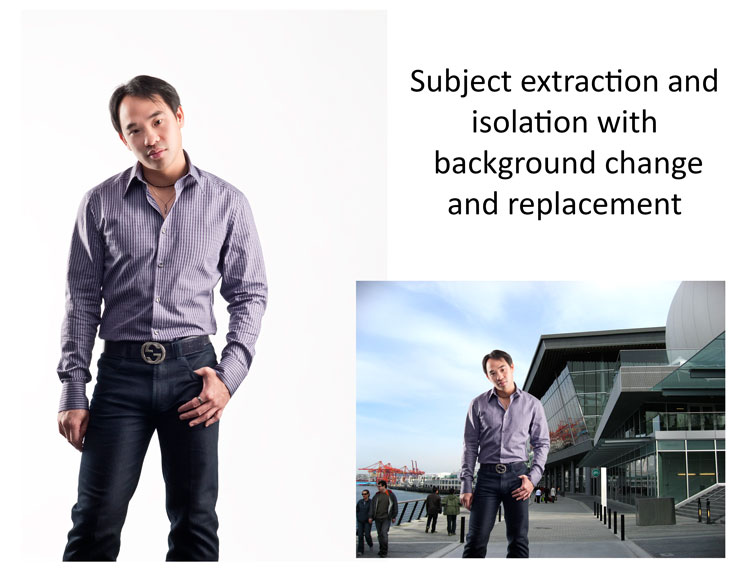 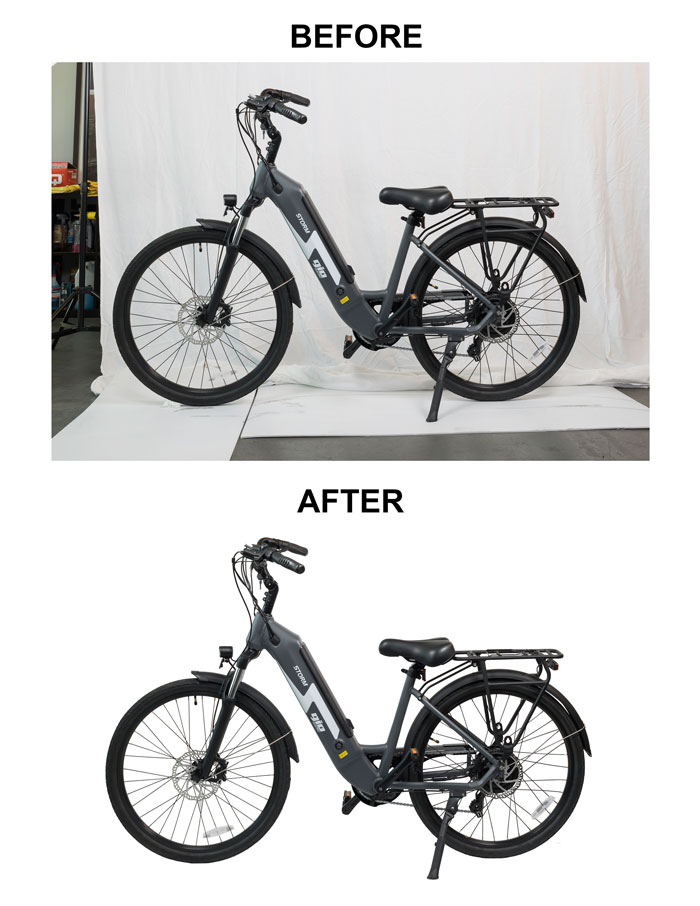 This example can also apply to extracting people subjects from a background onto a pure white background. 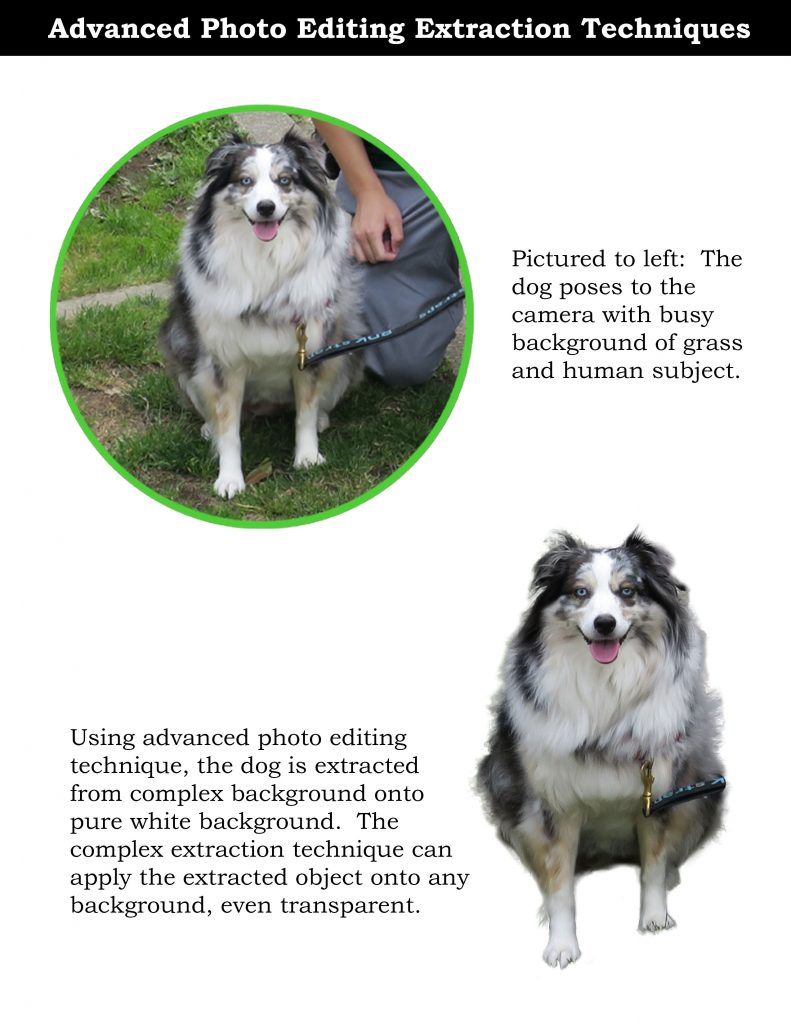 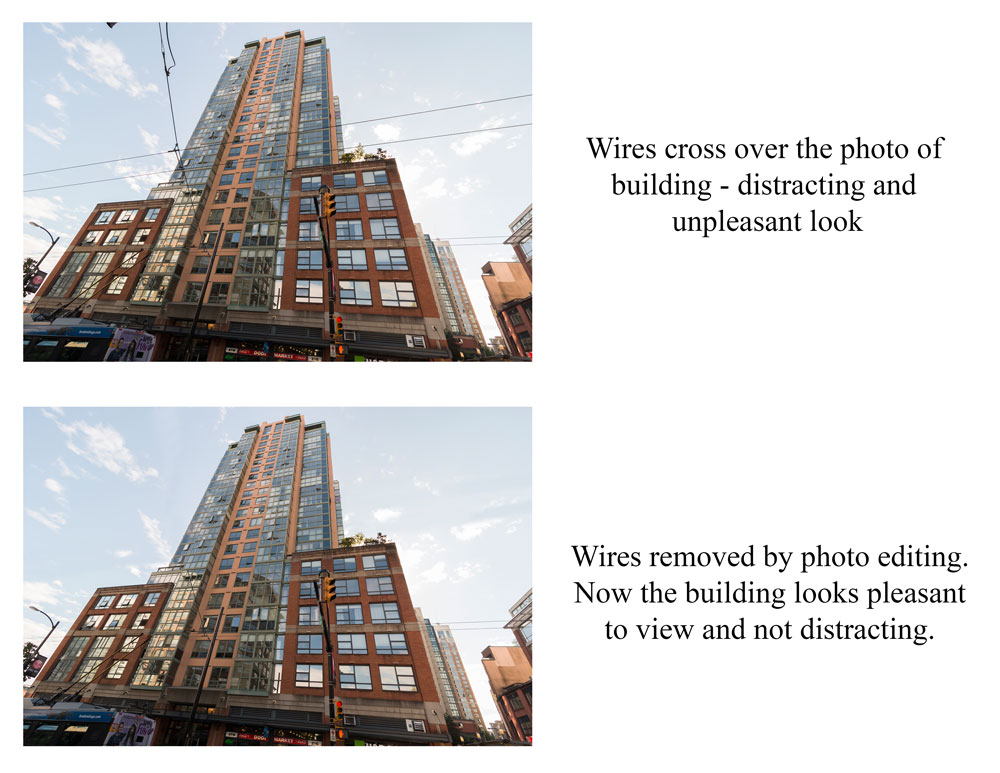 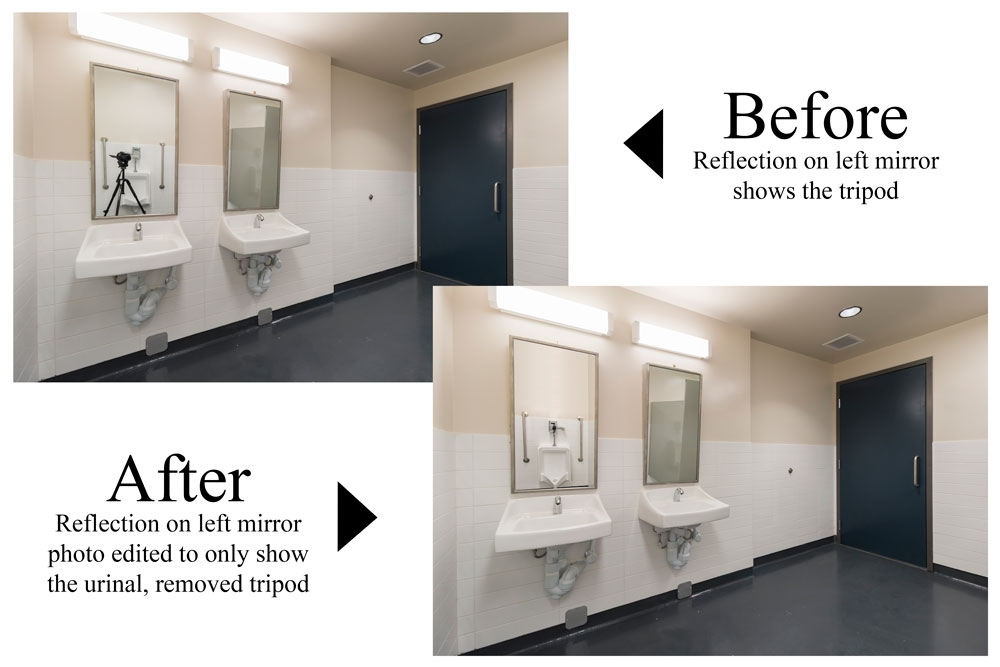 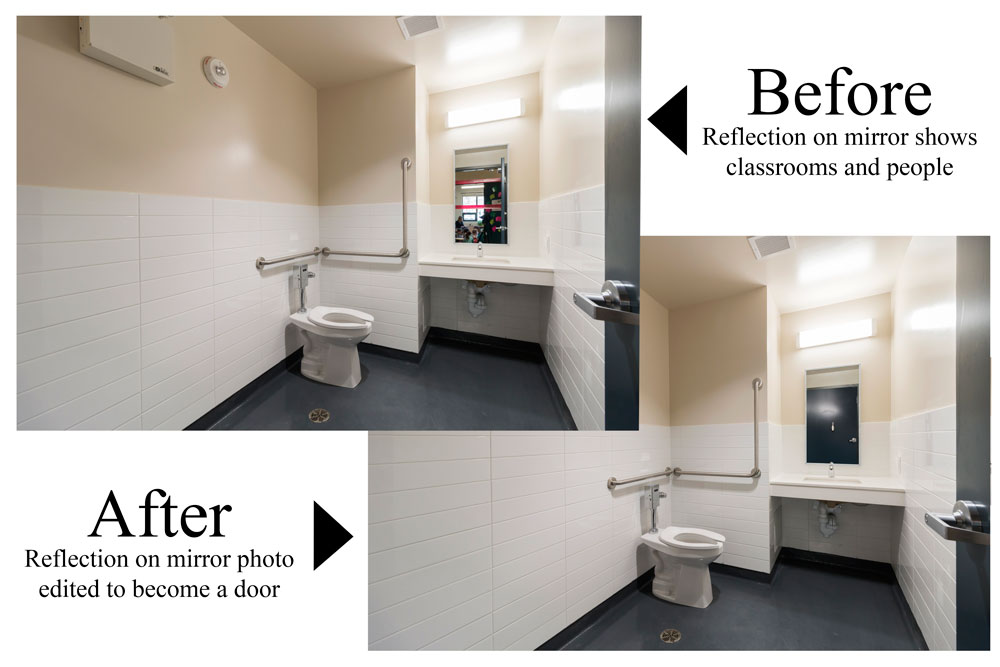 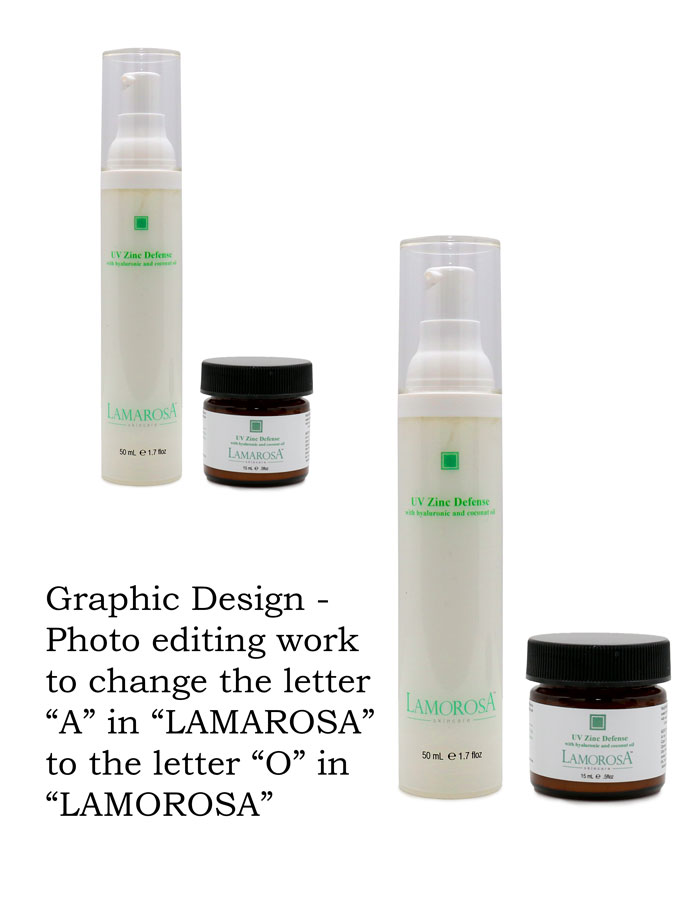 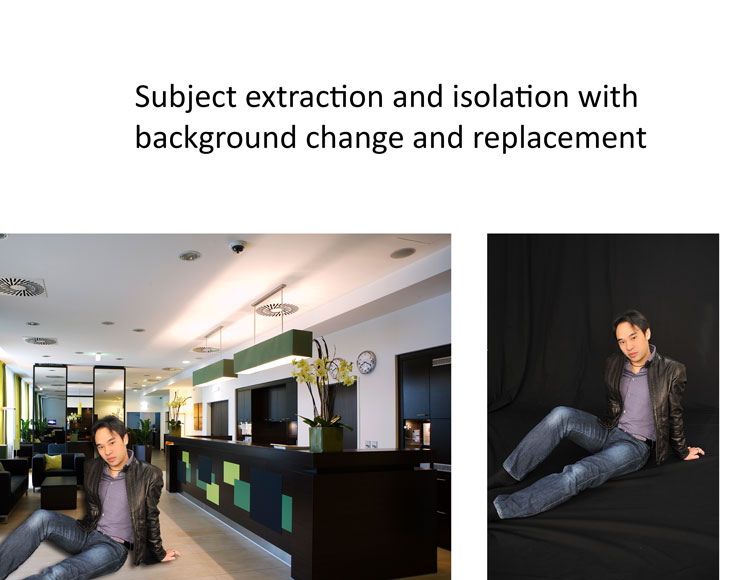 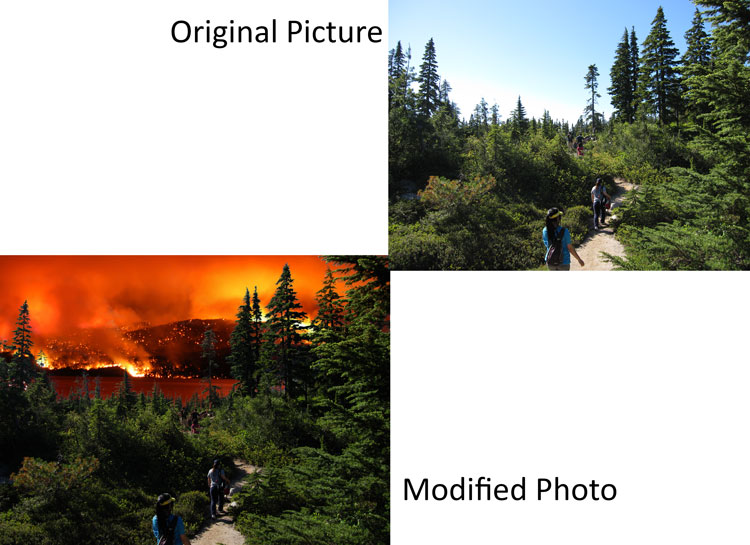 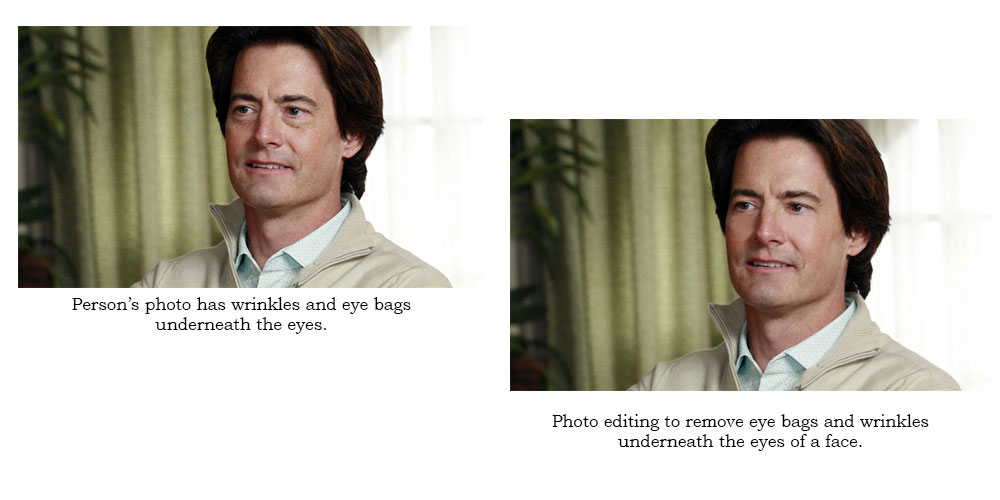 An example of photo editing in Real Estate applications.

There are times we are asked to photograph products that are highly reflective in nature.  Our product photo shots of these types of objects would involve photo editing to remove or drastically reduce the reflection of the surroundings and camera equipment on the object in question.  The photo editing would be manually crafted such that it should blend realistically just as if the reflection does not exist at all or how it looks like at a different eye level. 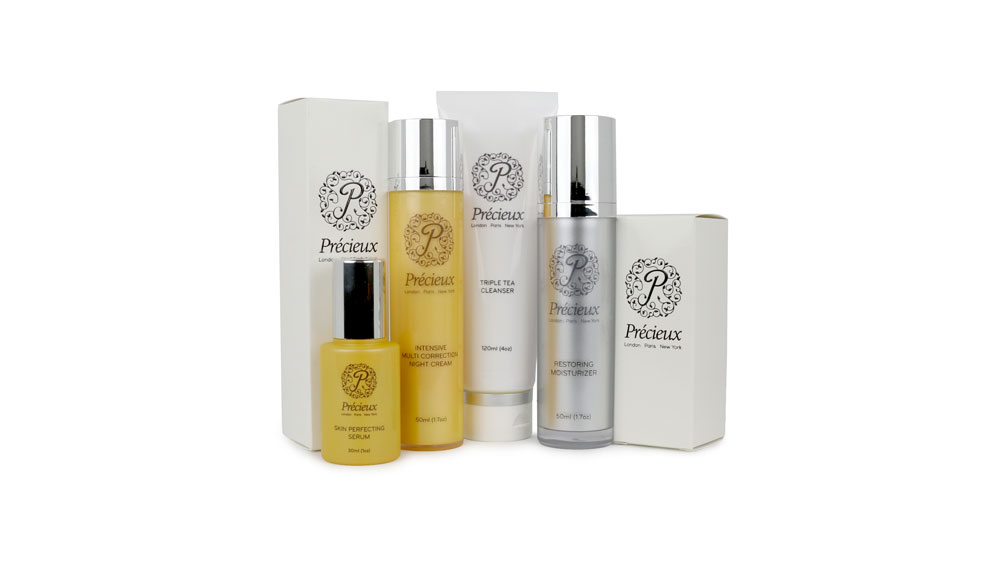 This photo represents original as-is photo shot with background removal, but with heavy frontal reflection on the lids. 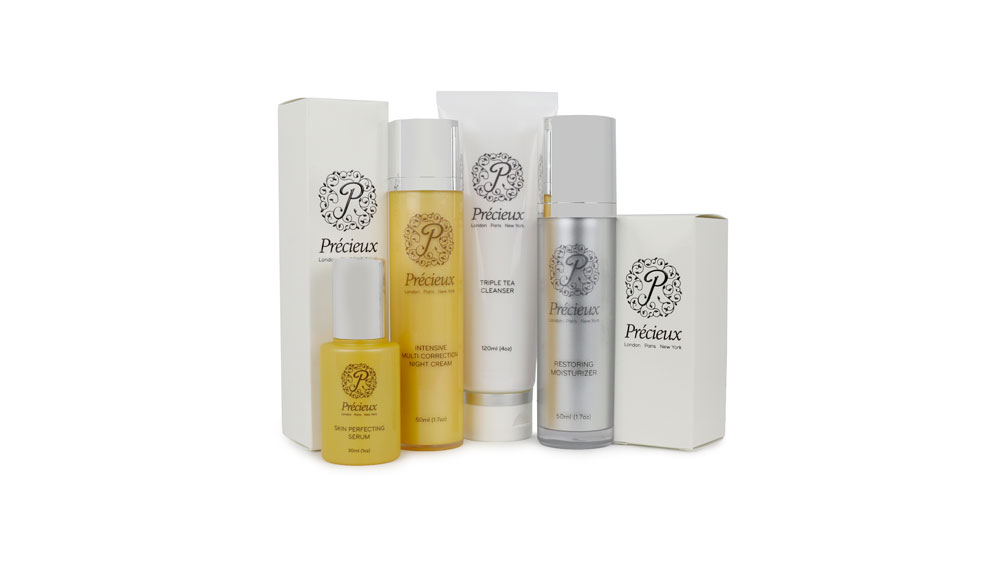 This photo represents after photo editing, with background removal, but with the removal of the reflections of the surroundings and camera equipment.

We assist transportation and other landscaping and architectural industries in doing before and after photo renderings.  For example, how a road or landscape looks like before an infrastructure change and how the environment looks like after the change as simulated.  This is also known as service in photo simulation rendering.  Other examples may also include showing the public how an expanded road look like with additional bicycle lanes and shoulders, etc (specific example pending). 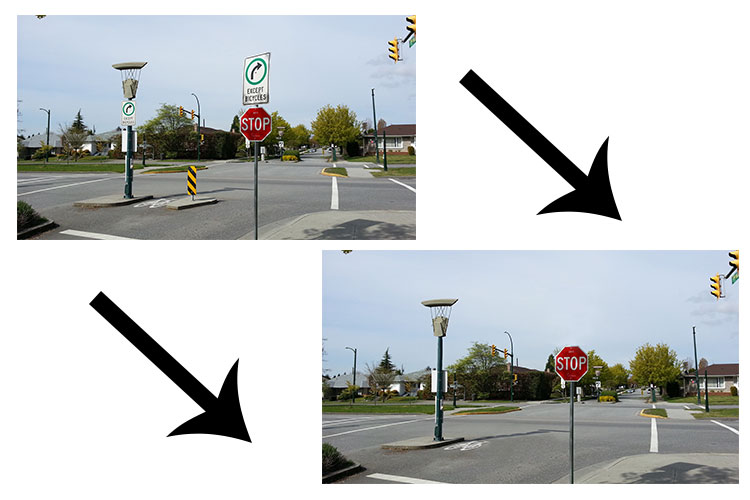 This example shows that currently the right out divertor and right turn signs exists. Now, traffic management wants them removed to improve traffic flow. The photo is retouched, modifed and simulated to have the diverter and signs removed in a realistic manner.

Bear in mind this is different than 3D Design and Rendering.  For simulated 3D animation and rendering, please visit this page. 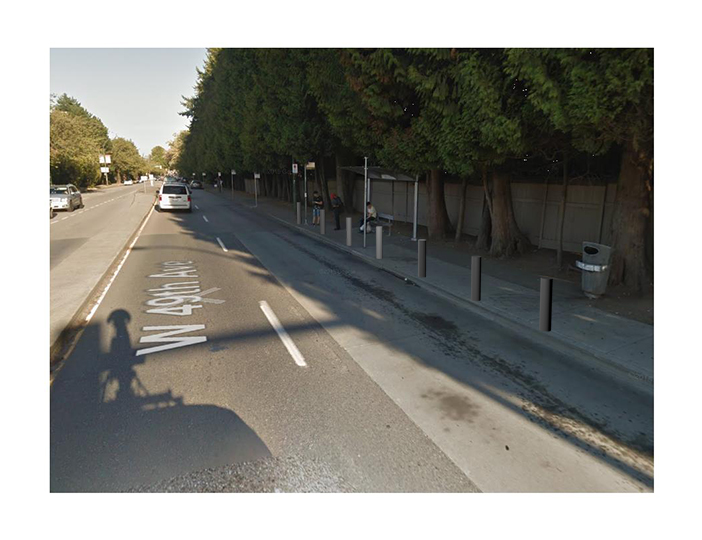 A 3D rendered protective barriers are placed on a existing street to illustrate the concept that the barriers will protect people waiting for the buses. 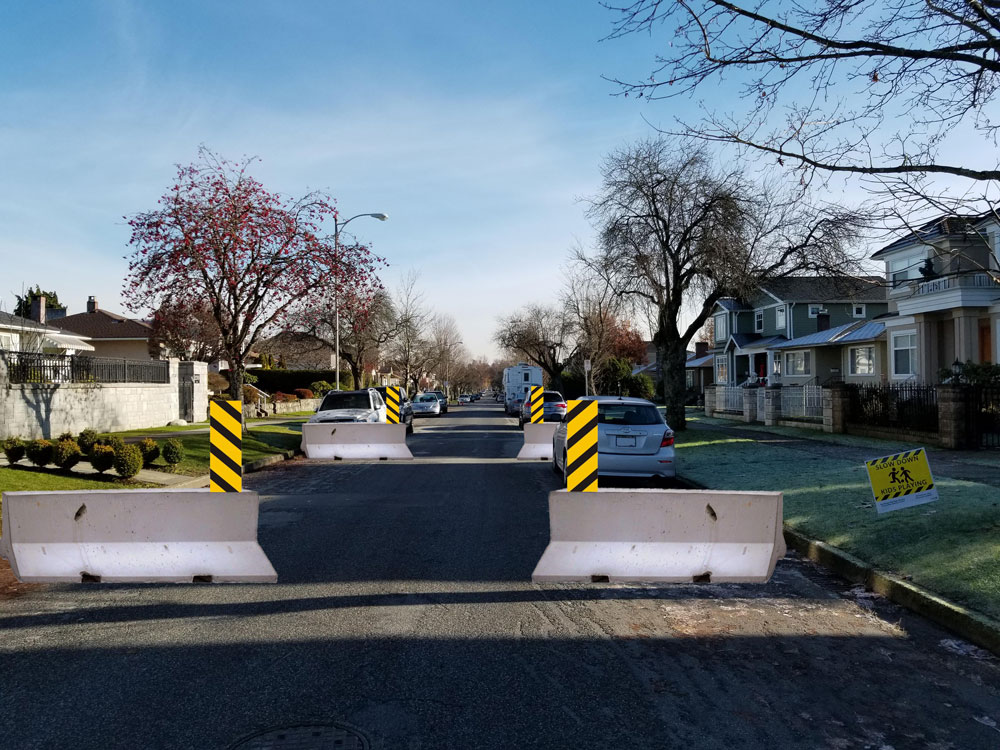 No need to worry about cloudy weather ruining the photo shoot.  We can change the gloomy grey skies into nice blue skies using photo rendering techniques. 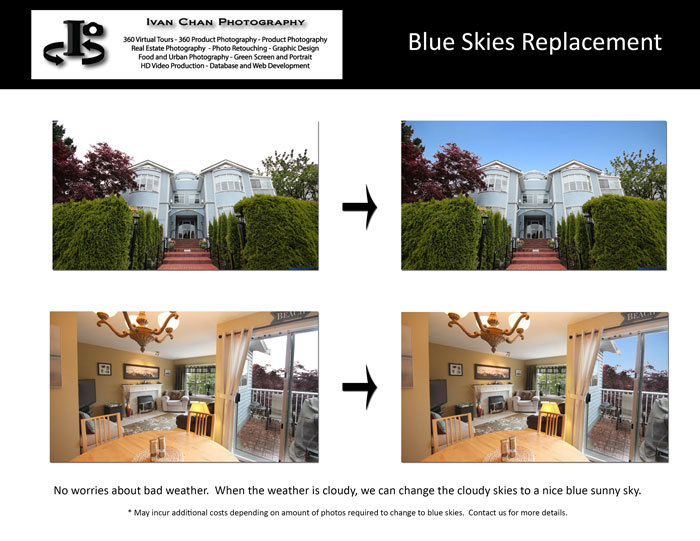 The following photo illustrates photo modification to remove camera equipment being reflected off the mirror. 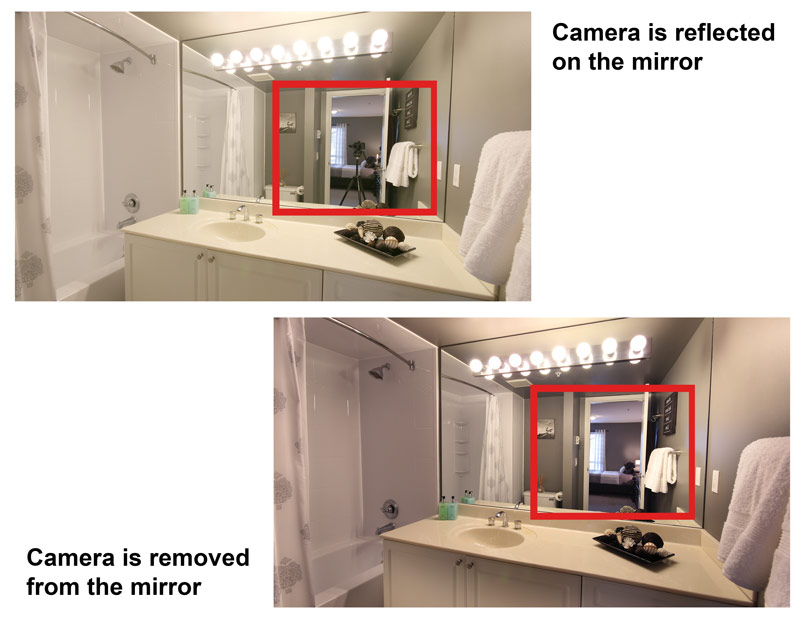 Camera equipment being removed off reflection from mirror